Trudeau’s first envoy to combat Islamophobia is criticized in Quebec, Alberta’s credit rating gets upgraded, and a BC councillor wants to tie traffic fines to income. Also, the CRA refuses to investigate billions in unaccounted COVID spending. 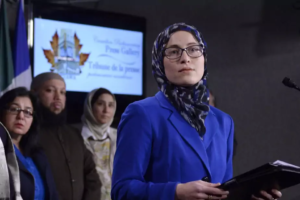 “The Government of Quebec and Quebecers are not racists. There may be racists in Quebec, as there are in the rest of Canada and as there are in the rest of the world. There may be people who are anti-Muslim and I regret that. […] But to call Quebecers anti-Muslims, to say that the law on secularism reflects anti-Muslim sentiment, is to show a great misunderstanding of who Quebeckers are and what the law is.” – Jean-François Roberge, the Quebec Minister of the French Language and Canadian Relations on the comments by Canada’s first special representative on combating Islamophobia, Amira Elghawaby.

Canadian oil is discounted due to lack of transport, a BC court case reveals immigration loopholes, a far right group attends Trudeau’s town hall to the delight of the CBC, and a fake hijab cutting incident sparks a rapid condemnation of Islamophobia.

A look at Canada’s 2017 Federal Budget and its allocation of funds. M103 has been passed but to what end? Premier Notley says a PST in Alberta needs a mandate. Meanwhile, the media misdirects on Snapchat and cardboard cutouts of the Prime Minister.

The landmark free trade agreement between Canada and the EU has been ratified. Canada has an immigration problem on its southern border, poor economic news for Vegreville and discussion on motion 103 which condemns Islamophobia without defining it!